The Granfondo Dobbiaco-Cortina is a traditional ski marathon races in Italy, it takes place since 1977 and it’s one of the biggest races in Italy, a good second after the Marcialonga. In 2010 its track hosted the Tour de Ski; from that moment it began to enjoy international fame. From 2016 to 2021 the Granfondo was one of the Visma Skiclassics races, a circuit for professional teams, thanks to which it was discovered by many Scandinavian enthusiasts.

The long history of the Dobbiaco-Cortina Granfondo began on April 3, 1977 after a heavy snowfall. The former Olympic skier Alfredo “Fredy” Dibona proposed to the current president of the organizing committee Herbert Santer to do a cross-country race and since then, numerous groups of sportsmen and friends from Dobbiaco and Cortina are busy renewing the charm of an event that is not only sport, but also a symbol of the historical and geographical links between the two Dolomite communities of Dobbiaco and Cortina.

The first edition was organized in a very short time and with a different and shortened path compared to the one we know today. 243 competitors took part, winners were Carla Alverà from Cortina d’Ampezzo and Maurilio De Zolt (then semi-unknown). From the second edition it was decided to bring the finish line in front of the Cortina bell tower, and participations abounded, so much so that the municipalities deemed it appropriate to make some improvements to the track to ensure a perfect running of the race.

The finish line of Dobbiaco-Cortina has seen big personalities as Maria Canins (7 victories from 1980 to 1992) and Maurilio De Zolt (6 victories from 1977 to 1997) “pass” over the years and many other top athletes; here we mention a few, aware that we are neglecting many others, so we invite you to visit the roll of honour page: Manuela Di Centa, Bice Vanzetta, Magda Geniun, Veronica De Martin Pinter (4 wins), Eugenia Bitchougova (10 wins), Stephanie Santer and then Giorgio Vanzetta, Giuseppe Ploner, Silvano Barco, Gaudenzio Godioz, Faustino Bordiga, Juan Jesús Gutiérrez, Maurizio Pozzi (3 wins), Renato Pasini, Bruno Debertolis (3 wins), to get to the most recent editions with Scandinavian champions: the Swedish Britta Johansson Norgren and the Norwegian Tord Asle Gjerdalen (3 wins). 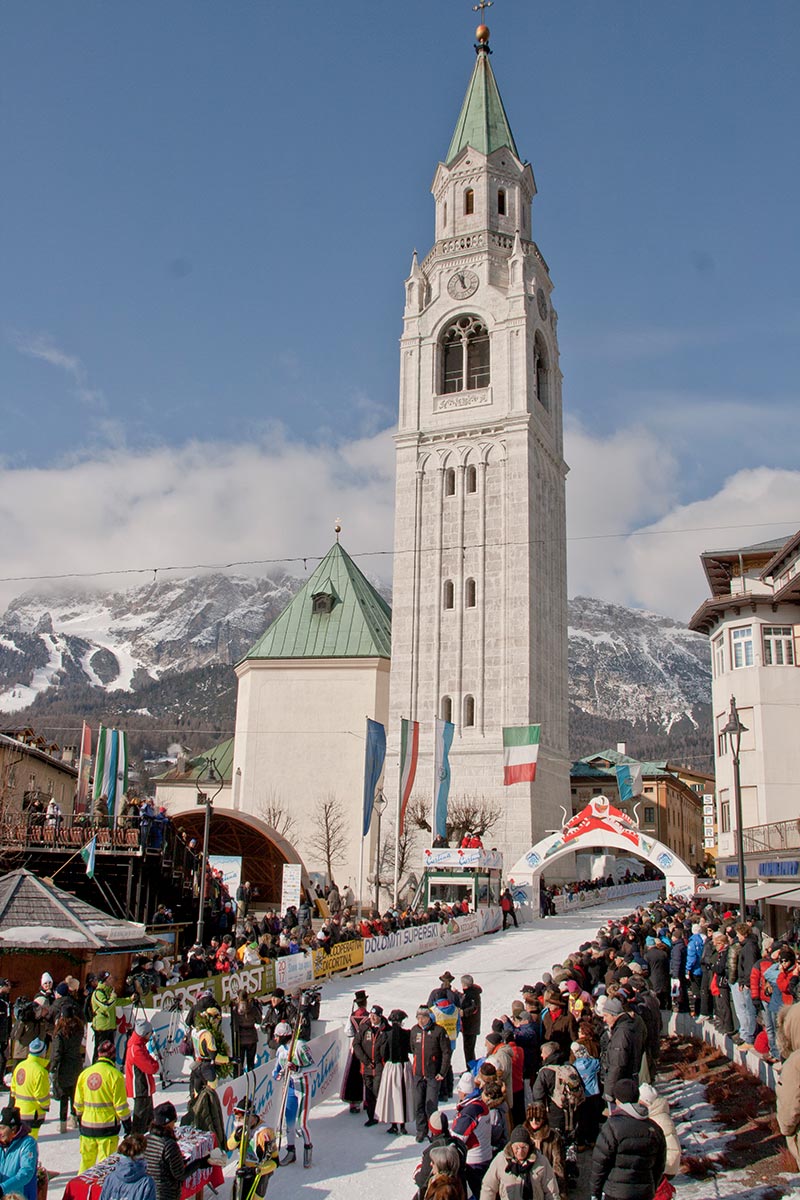 There are those who, more than all, are fond of Dobbiaco-Cortina, these are the four legendary “senators” who take part in all the editions held so far: Sergio Bachmann from Cortina, Vittorio Dall’O from Piacenza, Giuseppe Floridia from Borca di Cadore and Hansjörg Bergmann from Dobbiaco.

The traditional track of 42 km in classic technique runs along the old railway of the Dolomites, which was built during the First World War and disused in 1962. The site of the tracks of the unforgettable blue train has become a place for events and sporting activities, thanks also to the gentle slope and naturalistic or architectural beauties: woods, lakes, bridges, tunnels and old stations, all surrounded by popular and fascinating Dolomite peaks.

Over the years, various technical needs and the evolution of cross-country skiing have led to the transfer of the finish line to Cortina bus station area and the inclusion of a new race on the calendar. Since 2007 the Granfondo has offered enthusiasts a skating race too. The two races of Dobbiaco Cortina take place on different days, this allows long distance enthusiasts to participate in the two races.